US Remake Of Misfits Better Still Be Misfits 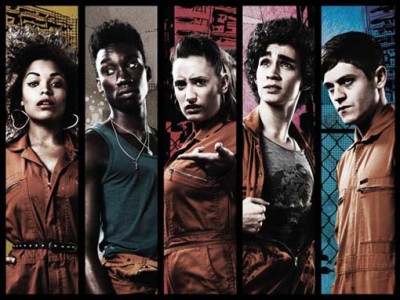 Have you seen the one about a group of misfits who get super powers and save the world? What about the one where they’re all jerks, dismissed by society and sentenced to community service?

Oh, and they have accidentally murdered a social worker or three.

The UK Misfits finally filled the void that other teen fantasy/sci-fi shows had been missing. Realistic imperfect characters put in ridiculous situations with believable responses.

These teens do drugs! They have one night stands, swear and have to fight for their lives. The show managed to work in revenge plots, blackmail, and the bonding of strangers over murder-y secrets.

This unique combination of a real depiction of teenagers, real world issues mixed with supernatural ability, created great entertainment. It was unique to the superhero landscape because it told a story from the perspective of delinquents.

It was only a matter of time before someone tried to take the show across the pond.

There are plenty of reasons fans of the show are and should be hesitant about what kind of adaptation will be taking place for this beloved series. It’s been picked up to be on Freeform, home of Shadowhunters and Pretty Little Liars. Both are shows that are entertaining in their own ways but both have a distinct tone as well.

It wouldn’t be surprising if a lot of the edge and bite of the original fades away. The US has much stricter guidelines in regards to sex, drugs, and language that can be seen on basic cable.

If the show was moving to FX, where the envelope for what’s acceptable for late night basic cable is continuously burned to ash, then at least there would be an assurance that the core of the series would remain intact.

Would it be impossible for Freeform to tell a great story utilizing the UK’s Misfits as a base?

A prime example of a successful fantasy remake has happened. Another UK hit, Being Human, did very well on SyFy.

It definitely looked like it was going to turn into a buddy-buddy sitcom about a Werewolf, Vampire, and Ghost but amazingly the show took on a life of its own. The homage to the source material was there.

The essence of the original show intertwined with storytelling that related to American audiences and it worked well. Freeform can do the same, but it has to remember what made the original so great:

Next article The Scream Squad – Mock and Shock (PODCAST)