Hello again fanbros!!! Time for another episode of the Boondocks. So far this season has been lackluster. The topics have been stale and the plot thin. However this recent episode was a little better than the rest, I laughed once or twice. Perhaps the writers are finally starting to wipe the dust out of their eyes? Let’s see…

Riley’s jacket is as old as he is

Grandad is staring at a pile of bills with a forlorn look on his face. I’ve been there… Huey and Riley just tried on their new clothes from the thrift store and complain that they aren’t stylish enough. Grandad quickly unbuckles his belt at the sound of their insolence. Huey stops him with an idea, getting a job. Grandad complains that old folks don’t get hired and when they do, they’re slow and chatty. True. Huey boosts Grandad’s confidence by citing the strength of their forebears and convinces him to look for work. When Grandad arrives to the job office, the line is around the block. A friendly Latino man tells him there’s no work, they’re all waiting for ALMA award tickets. Not true. Grandad walks away dejected as the men in line laugh at their trick. Grandad talks to Uncle Ruckus about his situation. Naturally Uncle Ruckus blames President Obama, says how much he likes being under the white man and something about Mexicans having good work ethics. Almost as good as the mini-Mexicans otherwise known as Guatemalans.

If Tom had a show it’d be True Life: I love The Man

Grandad stops by the unemployment office to get professional assistance. The man reviews his application with concern. Grandad is unfriendly, too comfortable cursing in a professional setting, and perfect for the TSA. I howled at this part of. If you don’t get mad at the TSA workers, you’re mad at the slowpoke in front of you with knee-high laced boots or the man with endless loose change in his pocket. But Grandad kept it too real at the TSA and lost the job. “Is that a full size shampoo bottle nigga?” He even dressed up in a lady liberty costume waving a sign on the sidewalk. If he was an actor, that would be the equivalent of straight-to-dvd.

Grandad about to unleash more than 3 oz of whoopass

Huey calls Tom to help Grandad get some work. Tom suggests volunteering as a resume builder. The two of them go to the local senior home. With a large hard of hearing population, Tom’s wailing can be appreciated there. Grandad chats with Geraldine, a resident, and decide to leave Tom’s concert. Geraldine explains that nursing homes are smelly, depressing, poorly staffed, have bad food and no escape in sight.

She takes him to the arts and crafts room, a front for their male escort operation. Grandad is happy to oblige. Grandad thought he would be doing the horizontal tango, but instead he’s cuddling, massaging and telling women they’re pretty. When he complains to Geraldine she breaks it down for him. Black women desperately want a man and because Black men are “stuck on stupid” they will settle for any form of affection.

Grandad enjoying time and a half pay

Grandad meets a nice client, Vanessa, who invests all her money into the relationship and moves in. At first he’s alarmed and asks Uncle Ruckus to help him evict her, but Vanessa is a blessing in disguise. Grandad attempts to break from Geraldine but her geriatric goons refuse. The boys love Vanessa and want her to stay. When Vanessa decides to introduce her darling Robert to her bitter besties, everything falls apart. Uncle Ruckus comes in with a stage five clinger, a white woman named ‘Becky.’ The bitter friends escort a brokenhearted Vanessa outside as Becky prostrates herself at Robert’s feet. Soon after the breakup, Geraldine and her crew are thrown in jail for prostitution and Becky bails out Grandad. Fortunately Becky leaves when Huey whispers of a basketball player moving in down the street. End scene. 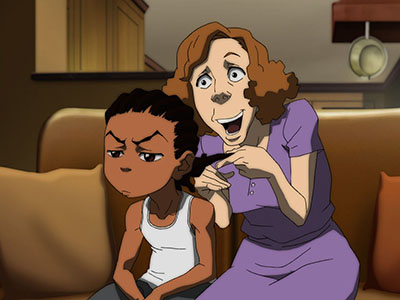 Riley’s face says it all

The episode was okay until Grandad met Geraldine. The point of satire is to make fun of society or the forces at large. It felt like the writers were making fun of Black women, not the absurd notion of Black women being desperate. It would have been interesting if Vanessa was unimpressed or simply hired Grandad to do housework. The bitter, church-going, single Black woman has been a running gag for over 20 years. If this subject is chosen, there must be a new spin on it. I think it would have been better to go with Grandad working at the TSA since the constant changes in airline security always keeps that topic fresh. What did you guys think of the episode?