Looking over the desert, a metaphor for the season?

And here we are again, another week and another episode of The Boondocks. They say third time’s the charm, but no such luck. I don’t know where the rest of the season will lead us but hopefully the laughs will increase.

The episode starts with Grandad wildly barreling down a desert road in an RV. Riley and Huey are holding on for dear life and hoping they don’t die. Since the scene is an almost exact replica of Breaking Bad, we know what’s up next. The RV crashes into a boulder. Grandad and the boys hop out, frantic and panicky. Soon sirens are heard close behind. Grandad decides to stand in the middle of the road and face The Man. Before we see the final showdown, we rewind to the beginning, to explain why Grandpa would be driving an RV in a gas mask and Hanes 7-pack briefs. 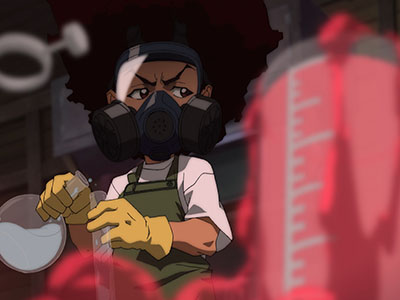 Huey is in the garage with an array of chemicals, vials and mixtures, up to something no doubt. Grandpa asks what the pink gel is, “You better not be makin no booty-hole bombs around here!” Huey tells Grandad it’s nothing but wave cream. Grandad leaves him alone and they head out to a meeting with their financial adviser. He tells them the obvious; they’re broke. The credit cards have all been maxed out and they might have six months before turning to selling organs on the black market. Grandad sits stunned. (sidebar: How stunned can you be after selling yourself into slavery? But I digress)

Grandad is back at Uncle Ruckus’s car wash sweating and suffering under his bug-eyed gaze. (sidebar: how does this man have eleventy-million jobs but not one shirt that fits?) Grandad doesn’t learn his lesson easily and decides to go on a date that evening. Riley stands in the doorway chastising him for trying to spend money on women when they are broke. Ignoring him, Grandad continues pruning himself. He’s unfortunately out of Nap-B Gone and grabs some of the mysterious ‘wave cream’. His “hot date, hot date, hot daaaaate” calls to decide where they’ll eat. Luckily the date cancels when Grandad admits he cannot afford Mr. Chen’s. Riley is relieved. Grandad tries to gain sympathy. He speaks of how, lacking everything else, he could rely on money to guarantee a woman sticking around. Now, I could pause here and deconstruct how terrible that mindset is, but there isn’t enough time.

Am I the only one not surprised by Tom’s straight hairstyle?

Grandad wakes up the next morning with a head full of luscious locks. Tom and Jazmine come over and reveal they have silky locks as well after using the wave cream. Huey is furious, the wave cream is really a highly dangerous compound. It was supposed to blow up Ed Wuncler Jr. to emancipate the family. He demands everyone wash it out immediately. Nobody will. Grandad argues the cream is the key to their freedom. They head down to “Right Like White” hair salon to meet with Boss Willona, an African American female en-tre-pre-neur. Despite the explosive side effect, she buys it all. Bomb Wave Cream is a hit. Women are lined up down the block to get their tresses flowing. Unfortunately a news report reveals that the cream contains an explosive ingredient. Grandad and the boys head back to Boss Willona to return her money. But she doesn’t care about the report, she’s ready to sell it behind closed doors. 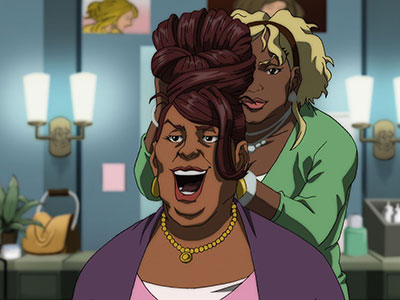 Serving Auntie at your wedding realness, get into it!

I’ll stop here as the rest of the episode pretty much falls in line with Breaking Bad. This episode was stale. The attempts at satirizing the Black hair business failed. It did succeed in making Black women look like fools, using outlandish hairstyles and fanaticism to express how they loved their straight hair. The writers didn’t hint at the underlying reason for this texture-madness (white standards of beauty) which could’ve saved the episode. It seemed more focused on the foolishness of the women themselves. Also, that topic alone has been beaten to death. What would’ve been interesting is if they tackled the natural hair renaissance that’s happening right now. In addition, the constant “that’s gay” refrain is getting old. I know that’s what Riley is known for but it’s like he has a string hanging from his back. Maybe things will pick up. As Vanderbilt advised last episode, “It’s never too late to fake your own death.”

Next article The Willow Smith WTF Episode (FanBrosShow No. 49)