Monday’s episode of the Boondocks was refreshing. It was almost like the previous seasons where each episode was an independent story arc. Uncle Ruckus didn’t have much screen time and for that I am grateful. I’m not sure why Uncle Ruckus has had so many lines this season, but I was glad to see him take the backseat. This week Grandad dabbles in new technology and it..uh…dabbles back. 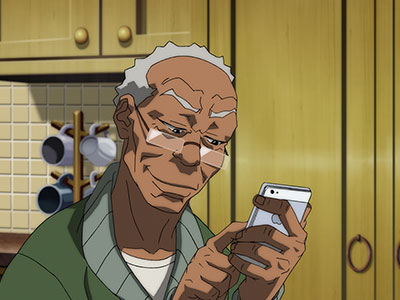 After this episode I bet Grandad is #TeamRotary

Grandad sees a commercial for the new iPhone with Siri. George Lucas is asking Siri a series of mundane, yet hilarious questions that Siri answers to her ability. Grandad is enthralled by this new technology and rushes down to the apple store to get it. I’d like to interject and say that the following is the most accurate depiction of an Apple store and its employees I have ever seen. I felt like I was in the store too. Grandad wants Siri but the iPhone is too small. He wants the large screen of a MacBook, but the touch screen of an iPad. He wants everything all in one. The Apple store ‘genius’ tells him that’s impossible. Grandad blows a fuse and rants about how it should be possible. He leaves with an iPhone.

Back at home Grandad shows off his new gadget. Riley says what everyone else is thinking, “But we bankrupt!” Grandad believes that Siri will help him fix all his troubles. To prove them wrong, Grandad starts talking to Siri. She is able to find information on each one of them, Grandad is convinced he’s made the right choice. The next day Siri starts guiding him on the right path. At the health food supermarket she shows him that he needs to start eating better. Grandad is elated when he sees “Gluten-free fishsticks! This place is amazing! I can get healthy versions of all the crap I eat!” However he can’t afford any of the delicious, healthy treats. He goes to a financial analyst, Gary, but he can’t afford him either. Siri turns red and Gary then decides to take on Grandad pro bono. Hm…. Siri even helps Robert beat Uncle Ruckus at checkers, switching the cheat moves to a picture of him and Dorothy Dandridge. 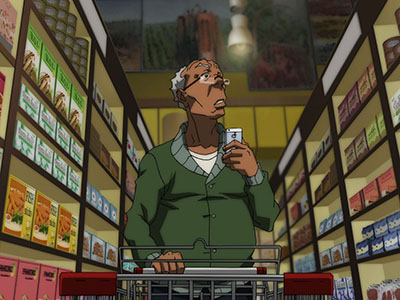 The next morning Siri instructs Grandad to check his finances. There’s $500,000 in his account. When he asks how this is possible Siri replies, “With me in your life all sorts of good things can happen.” Is Siri part of an app crime mob? Something’s up. Grandad professes his love for her. Downstairs Riley is enjoying all the new gifts while Huey asks important questions about the source of this money. Grandad brushes them off and takes a stroll with Siri. He wishes he could find a woman just as amazing as she is. Of course Siri offers to help. Since she already has his passwords (hmmm) she will seek out and contact potential dates in the area. Robert goes to the local cafe to meet his dates. Siri doesn’t find any of them suitable, questioning Robert’s level of self-respect. Robert objects and Siri makes a date with woman #2. The date seems to be going well before Grandad leaves the table. “What’s up bitch?” Siri asks Jacqueline and it goes downhill from there. Robert’s date is over. 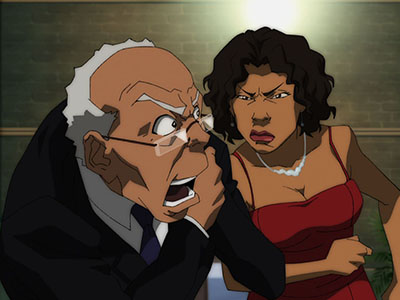 Whatever Siri showed Jacqueline was NSFW

Robert is back in the Apple store and asks for a new iPhone. The genius looks at his phone and is shocked by what he sees as the wallpaper. Apparently it involves fruit. ::shudder:: Robert is asked to leave the store immediately. He throws the phone in the garbage and gets an Android phone. Riley swiftly comes behind him and retrieves the phone. While out shopping Grandad’s card is declined. At home he tries to report his stolen identity to the card company. Tom is at his door. When he opens it, Tom starts yelling at him, calling him a “turd of a man.” It’s getting real. Apparently Robert posted something awful to his FaceBook page. The same page that Jasmine can see. Robert runs up to the boys’ room and demands to see the phone. He is ready to smash the phone with a hammer when Siri calls 911. She says a man is attacking her with a hammer and takes a photo of Grandad. 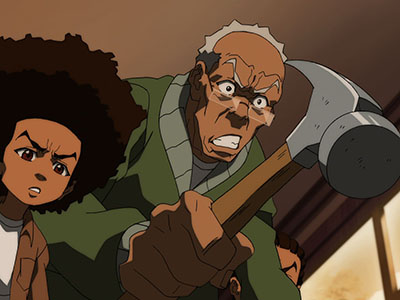 After the cops uncuff him, Grandad tries desperately to make them take the phone but they cannot. He drives to a remote destination and throws the phone off of the bridge. That night he has a terrible dream that Siri’s ghost is haunting him. He wakes up in a cold sweat. Then Siri starts talking to him, via his “piece of shit Android.” Later that morning Grandad explains to the boys that Ms. Siri is going to be a part of their family. Huey asks if she has taken him hostage because she has hold of his identity and has developed irrational feelings toward him. Grandad lies and says no. Riley snatches the phone away and the boys turn it off. Grandad tussles with them for the phone, scared of what Ms. Siri will do. He grabs the phone and runs off.

Upstairs he turns back on his phone. Siri is angry. She questions his devotion to her. Grandad tries to calm her. Then she asks for him to marry her. Yes, marry. Robert has no choice and says yes. At the wedding, with Uncle Ruckus presiding, she says that for them to truly be together, they must shed their physical shells. Siri wants Robert to die. She has copied his voice and sent correspondence to Al Queda. Enough that he is now on the United States terrorist list. A drone appears in the backyard and everyone is running for their lives. The drone lands in the backyard and luckily nobody is hurt. Grandad is removed from the president’s kill list, gets a free iPad, and Apple releases a software patch to prevent Fatal Attraction mode. Overall this episode was okay. It was amusing for the most part. I wish the season didn’t revolve so heavily around Robert Freeman but it wasn’t bad. I thought at first that Siri was going to force Robert to do some shady dealings like when he was being pimped out by the senior citizens. I think the episode did open up some dialogue about the role of technology and what  will the future be like for these human-like apps. What are your thoughts?

Next article The Children Game Of Thrones Finale Recap (FBS Special Delivery No. 29)