I’m back from my vacation and catching up on all things Boondocks. This week Grandad is dating a Kardashian. Not the quiet one. Not the tall one. Not the one that keeps Ray-J relevant. Introducing Kardashia Kardashian, another young women with a lot of booty and a penchant for Black men who used to fight The Man. She’s pitching a reality show about her relationships with Grandad. Naturally Robert Freeman has no qualms with this arrangement as she is making it rain, not just money and gifts, but perhaps freedom…as rich white ladies are known to do. Kardashia’s Black “bestie” Brownee Point is along for the ride. She’s hoping to get her own spinoff show too. While hauling in goodie bags Brownee’s weave gets caught, though she asks for help, no one budges. Hmmmmm… Kardashia and Brownee are off for some celebrity endorsement appointment and Grandad enjoys watching Kardashia leave. Huey is thoroughly unimpressed by the entire situation.

Just the two of us…and your money

Another Kardashian appears, the irrelevant one, their brother Bench. He’s upset that Kardashia has stolen his chance to shine. He pitches a show idea to Grandad but Kardashia is still in control. While she knocks over every object she passes, Huey notices that her butt has gotten bigger. When Kardashia sits on the couch she almost flips it over, and Huey calls out her fake derriere. Grandad refuses to believe the accusation. Huey and Riley speak outside about Kardashia. Riley has decided to enjoy all the items on his Amazon wish list and Huey decides to do some sleuthing. He attaches a tracking device to Kardashia and Brownee’s car which leads him to Fake Cakes. Huey peeks through the fence and sees Kardashia getting inflated. He returns home and tells Grandad but Grandad doesn’t care.

Cuz my body’s too bootylicious for ya babe

Kardashia and Grandad are enjoying a nice evening out discussing their plans for the reality show. Grandad asks for “the best yellow wine” to toast their future success. Suddenly Kardashia starts twitching and a loud bang reverberates through the restaurant. Her butt has exploded. At the hospital the doctor diagnoses her with AAAS or Ass Augmentation Addiction Syndrome, she’s not likely to survive. Grandad tells Bench this is their chance to shine. They set off to seek vengeance for Kardashia. They rough up the quack doctor and give him a taste of his own medicine. His head now resembles a blow-pop. 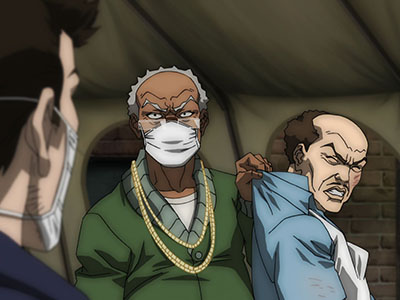 Do it for the vine Bench!

Back at the hospital, Huey and Riley start searching for food when they are invited to break bread with Mother Maria. She was a missionary in various parts of the world and a volunteer nurse during the war. She dedicated her life to serving others. Unfortunately she doesn’t have many visitors. As Mother Maria is imparting wisdom to Huey and Riley, Bench and Grandad plot. They’ve decided to try to get into Kardashia’s will before she dies, then try and make it on their own show. Uncle Ruckus is praying for Kardashia’s recovery, and the continuation of Grandad’s dream, a rich white woman. 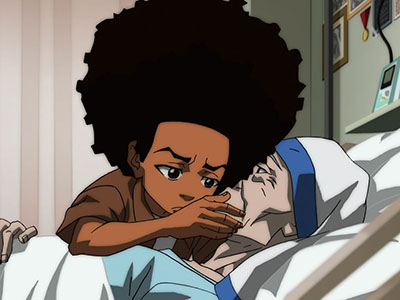 Mother Maria is still telling the boys stories of her brave youth. Huey is moved and tries to get a nurse for her. Kardashia’s room is full with cameramen, “friends” and nurses. The doctor comes and states that a transfusion of AB blood might save her. Bench Kardashian then exclaims that Kardashians have always had O type blood. The jig is up. Kardashia breathes, “I just wanted to be on TV,” and dies. Grandad yanks off the promise ring and walks out. As the Freemans walk out Huey pauses to look at Mother Maria. With Brownee’s guidance she starts talking about the old days…of putting out and sleeping with Eisenhower. Roll credits. 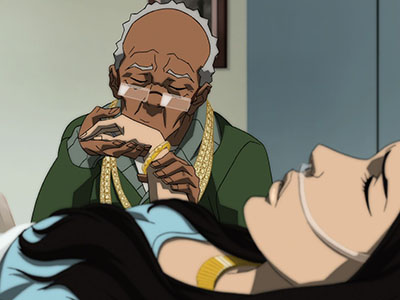 At least all the gifts were paid in full

It was…lukewarm, at best. I wasn’t laughing, I wasn’t ripping out my hair either. It was kind of like going to the second-rate Indian restaurant when you don’t wanna cook and don’t feel like going to the first-rate one across town. My overall reaction was meh. Let’s see what next week has to offer. I hear it involves chains.