Fanbros I am so happy to let you know that the Boondocks has finally struck gold! I watched this week’s episode and laughed! The storyline was great as well as the black and white animation. Grandad Robert Freeman is known as a civil rights pioneer, even though he seems more apt to mind his business and let others march. This episode revealed Robert’s role in the Freedom Rides and his “participation” in fighting against the man. It appears that this is a PBS special or some sort of documentary about the Freedom Riders. Several of Robert’s old colleagues are being interviewed about the day Robert earned his legendary status. Robert asks for a ticket to Chicago

Robert is in a bus station May 15, 1961 buying a ticket back to Chicago. He reads that the freedom riders are going to be at the station that day and he is glad he’ll be gone when they arrive. He goes to use the “colored” restroom but it is filthy. After trying to bring attention to the white ticket booth worker, Robert instead decides to sneak into the “whites” restroom. After he “takes a dump for freedom” the white employee notices and goes after Robert.

Robert narrowly escapes onto a bus, the bus full of freedom riders. When he explains to a fellow passenger Diane what happened, she’s ecstatic, asking Rev. Sturdy Harris to listen to the amazing (embellished) tale. Sturdy, congratulates Robert on his stand for justice. After he asks where Robert is headed, he lets him know that he is on the wrong bus. Robert attempts to get off but Sturdy is convinced an act of God made this happen. Every time Robert protests, a chorus of Ain’t Gonna Let Nobody Turn Me Around fills the air. A last minute attempt to bribe the bus driver is fruitless, Robert is a captive of freedom.

Sturdy lays out his strategy to Robert, nonviolent direct action. The freedom riders would take a stand, incite the oppressors, and when they get violent, do nothing. The only defense they have is Negro spirituals and a bubble wrap form of martial arts called “hard chin, soft hand.” Or as Robert would say, “the dumbest s*@# I’ve ever heard of in my life.” Sturdy is convinced this is the only way to end Jim Crow. Robert would rather move north. 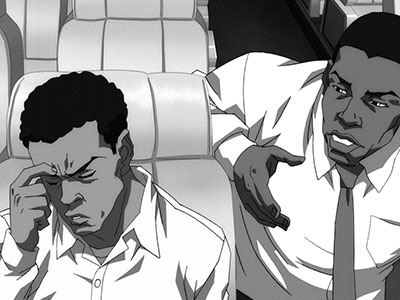 Robert trying to understand the virtue of a whoopin

The riders are on their way to dangerous territory. Birmingham was notoriously dangerous for black people. Bull Connor, the mayor, was a bigot and employed Uncle Ruckus to help him stir up trouble. The Klan was allowed 15 minutes of violence against the riders without fear of repercussion. When the freedom riders pull into the town, an angry mob awaits them. Sturdy calms the passengers and leads them off the bus. Violence ensues immediately. Sturdy practices his pillow fight style combat while Robert uses his belt to protect himself and Diane. Uncle Ruckus sneaks behind the bus, no doubt up to something. 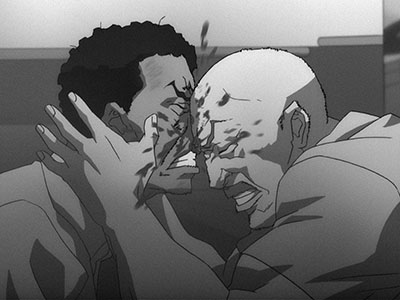 A brawny white man starts pummeling Robert and Diane struggles between practicing nonviolence and protecting a friend. As she decides to strike, Sturdy snatches her away and gently removes the white man from Robert. Each time Robert tries to attack his oppressor, Sturdy foils him and inadvertently gets Robert hurt. The police finally arrive and disperse the mob. On the bus Sturdy and Robert get into an argument over the definition of victory when a note is discovered by the driver. The note reveals a bomb has been placed under the bus and will detonate if the bus exceeds 15 mph. If the bus stops it won’t detonate. If anyone leaves the bus it won’t detonate either. Uncle Ruckus was actually being reasonable. Huh. Robert attempts to leave but Sturdy is determined to see his vision through. 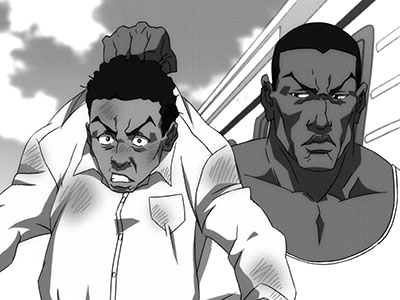 As the bus approaches the Mississippi border, a federal agent stops the riders to convince them to turn back. The agent warns that a swarm of law enforcement have been ordered to shoot the bus on site if they cross the state line. Sturdy lets the wounded leave, but keeps Diane and Robert onboard. At the border Bull Connor and Uncle Ruckus mobilize the officers to protect the “white man’s way of life.” The bus drives into the town and a hail of bullets fill the air. Despite the onslaught the bus makes it over the state line. The federal agent appears to try and prevent the three riders from being harmed, but state law trumps him. Robert and Diane sit in stripes that night, the last audience for Sturdy to sing Ain’t Gonna Let Nobody Turn Me Around.

Bullets are the icing on the cake for Rev. Sturdy

I thoroughly enjoyed this episode. Many people today say they would’ve stood up to oppression but, most people were like Robert, scared. Honestly, it wasn’t hard to see why in the Jim Crow South. The satirical spin on nonviolent action was spot on. I too read history books and scratched my head at why they let those racists beat on them. Although Uncle Ruckus has taken a larger role this season, it was nice to see him in the background this episode. What are your thoughts?

Next article Star Wars: The Clone Wars “The Lost Ones” REVIEW