“How do I….say goodbye to what we had? The good times that made us laugh, outweigh the bad….” That’s right! It’s the final episode of The Boondocks. I had hopes that for the season finale, a hologram of Aaron McGruder would pop up in the writers room and give them a Tyra Banks “We were rooting for you!” verbal spanking and the series would end on a high note. Nope. I will give my full breakdown of the finale as well as some general criticisms of the season at the end. Let’s get into this recap!

We open the episode in Riley’s school cafeteria. A feminine white boy is dancing on a lunch table as music plays and his classmates cheer. Riley takes out his ear plugs and yells, “Ugh nigga, that’s gay! Cut that out!” This was of course recorded and has several million views on YouTube. A news reporter reports that Walter Sweetlove from LGBT organization Yes Homo said he would be investigating the matter. Riley responds to the allegations of being a bully by saying that his detractors are gay and have “outtie buttholes”. I mean he’s eight, I guess that insult made sense. A group of protestors have flocked on the Freeman’s lawn chanting “Gay is the new black,” something I found problematic but I’ll discuss later. 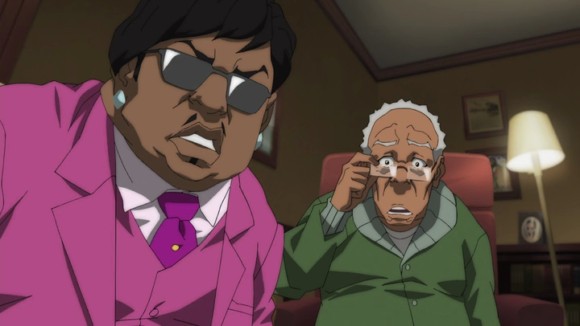 Rollo and Grandad try to find a way out.

Grandad naturally is freaking out. He wishes that some other minority group had been offended, anyone but the gays! Riley doesn’t see a problem with what he said. He was making an observation. Grandad advises Riley that if he sees something gay to look the other way. Grandad goes to opens the door and in strolls Rollo Goodlove. He’s there to prevent the Freemans from being extorted and also to get some shine since his sitcom was cancelled. Although Rollo himself used to extort people, he rationalizes it since ‘the gays’ have taken over that enterprise.

Queer Eye for the Homophobic Guy

The phone rings and it’s a call from Walter Sweetlove. He’s on his way to the Freeman’s to have a chat. By chat he means extortion because he was Rollo’s former intern in the 90s. Riley explains that he wasn’t using gay to mean stupid or dumb, he meant it literally. Grandad adds that he always taught Riley to ignore “people of homoerotic descent.” After learning the Freemans have no money, Sweetlove decides to use Riley for a youth campaign against bullying.

First Riley undergoes sensitivity training. Unsuccessful. Second, Riley records an anti-bullying PSA. Unsuccessful. Third, Riley must issue a public apology. His statement is typed for him and Grandad and Huey hope he sticks to the script. Unsuccessful. Riley says “Gay is gay” and hops down from the podium. Grandad rushes in to try and salvage the apology by saying that Riley is special. A reporter asks if he means special needs. Rollo swoops in and says yes, Riley is special needs. This is when the episode took a bigger nosedive.

At home the Freemans are talking to Rollo about next steps. Rollo suggests suing Yes Homo for defamation and getting that gay gold. Suddenly there’s someone at the door. A Deebo look-al-like Wilbur Slowlove (really? Slowlove?) has come as a representative of the Specially Abled Association Against Defamation (SAAAD). Already disgruntled that there isn’t any strawberry milk, Slowlove tries extorting the Freeman family. When he’s told they have no money he goes with plan B. Riley will run in the Special Olympics and the picture from the race will be used in their national campaign. Grandad and Rollo agree to this easy task. Riley is upset, he doesn’t want to be special needs.

The day of the race is here. Riley loves the lack of expectations his teachers have set now that he’s special needs. As he steps onto the track, he looks around and chickens out. He doesn’t wanna be around all these “retards.” Slowlove flips out. He reminds Riley for the third time that he shouldn’t use that word. The other participants start beating up Riley. He breaks free and starts running down the track toward the finish line. Rollo and Sweetlove call it even as Riley’s picture inevitably is snapped for the campaign.

Finally! It’s over. The season that should have never aired, also known as season four is finito. Now I have voiced my concerns and criticisms about this season every episode, but this episode took the cake and the bakery. Before I begin, let me cite the dictionary. Merriam-Webster defines satire as “a way of using humor to show that someone or something is foolish, weak, bad, etc. : humor that shows the weaknesses or bad qualities of a person, government, society, etc. 1:  a literary work holding up human vices and follies to ridicule or scorn 2:  trenchant wit, irony, or sarcasm used to expose and discredit vice or folly.” A satire should use humor to make fun of an idea, government, or organization. Satire is not doing the exact thing that is offensive and then saying it is satire. It must be satire. This episode was one of the worst episodes of television I have seen in a very long time.

First, let’s talk about the premise of the episode, hate speech. As a Black queer woman I have heard enough hate speech in my lifetime to fill someone else’s lifetime. Hate speech is verbal violence. It is used to undermine and dehumanize the subject. It is used to make someone feel less than. More than that hate speech tells marginalized people that they do not have the power nor the right to define themselves. Not everyone knows that what they say is hateful or derogatory, but once you know better, do better. Riley attempted to say that he was simply calling a spade a spade but his refrain of “that’s gay” has been used for everything under the sun. He’s used it to describe men, women, food, clothes, phones, attitudes, and so on. That excuse doesn’t fly for anyone with a memory.

Second, the reaction to being called out. Instead of learning, or attempting to learn. Riley digs in his heels and no one tries to correct him. Huey, a supposed radical, is near mute the entire episode! He only gives Riley a few smacks upside the head. Huey who can bust out a monologue on white supremacy at the drop of a hat, was silent. Also, grandad and his ignorance was nothing to laugh about. His age has nothing to do with it either as the gay rights movement and the civil rights movement were gaining ground in the same eras.

Third, the representation and erasure of marginalized people who inhabit multiple identities. When the story added the mentally disabled community to the storyline I could not take anymore. If anyone Googles the history of mental illness and disability and how those people were and in some places still are treated, it is clear that the Boondocks is not interested in satire. Mental disability is on a spectrum. There are autistic people with degrees as well as people who cannot communicate efficiently. It depends. Blatant stereotyping and ridicule is not ironic. It’s disgusting. The representation of the LGBT community was terrible as well. Juxtaposing gay vs black as if black people cannot be gay and vice versa. Laverne Cox, Janet Mock, Robin Roberts, Wanda Sykes, Michael Sam, and Bayard Rustin among others are well known black LGBT Americans. We exist. It’s not a secret.

As I sat there fuming I wondered how many viewers agreed with this lazy portrayal? How many people like myself felt invisible? This episode was the fly on top of a cow patty season. The stereotyping and mockery would have been enough but they pushed another theme, that words don’t matter. This world is too “politically correct.” Words matter. Words are used to write laws that can enslave us, or free us. Words are used to prevent people from following an unarmed teenager. If words didn’t matter, nobody would ever be fired. If words didn’t matter, children wouldn’t be committing suicide over words. For those lucky people who by the roll of the dice were not born disabled and/or queer, it may seem annoying to have to keep up to date on the correct terms. But I promise, it’s not as annoying as living as a queer and/or disabled person.

Next article 15 (Not So) Guilty Pleasure Movies